The Structure of Matter

Think about icebergs floating in an arctic ocean under a sky of puffy white clouds, and you see a variety of shapes and textures. The chunks of icebergs are icy blue and made of frozen water. The ocean is liquid water. The clouds in the sky are puffs of water vapor. The ice, the ocean, and the clouds are all examples of matter, which is anything that has mass and takes up space. It is important to understand that not all matter is visible. For example, air is matter, even though it cannot be seen.

To decide whether something is matter, consider the definition of the term: anything that has mass and takes up space. The light waves that enable you to see the colors of the icebergs, the water, or the clouds do not have mass or take up space. Therefore, they are not matter. For this same reason, heat and sounds are also not matter. Different kinds of matter can be described in different ways. However, let’s first discuss the structure of matter.

All matter is made up of one or more elements, and each element is made up of atoms. An element is a substance in which all the atoms are the same. Nearly 100 fundamental elements occur in nature. Elements are represented by chemical symbols made up of one or two letters. The first letter is always capitalized and, if there is one, the second letter lowercase. The letters of the symbol are often an abbreviation of the element’s name in English. For example, the symbol for carbon is C, and the symbol for helium is He.

An atom is the smallest particle of an element that has the properties of that element Every atom is made up of even smaller particles called protons, neutrons, and electrons. Two of these particles, the protons and neutrons, are found in the nucleus-which is located in the center of an atom. A cloud of particles, called an electron cloud, surrounds the nucleus.

Periodic Table of the Elements

In the early nineteenth century, only a few elements were known to exist. In 1869, the Russian chemist Dmitri Mendeleev compared various properties of individual elements, including color, atomic mass, density, melting point, and boiling point. Mendeleev concluded that the elements should be arranged in order of increasing atomic mass. In 1913, Henry Moseley, a physicist, arranged the elements according to increasing atomic number instead of atomic mass. Immediately some of the inconsistencies associated with Mendeleev’s table were eliminated. The patterns identified by Mendeleev, Moseley, and others serve as the foundation of periodic law. The resulting arrangement of elements has become known as the periodic table. Each square has a label that includes the element’s name and its properties. 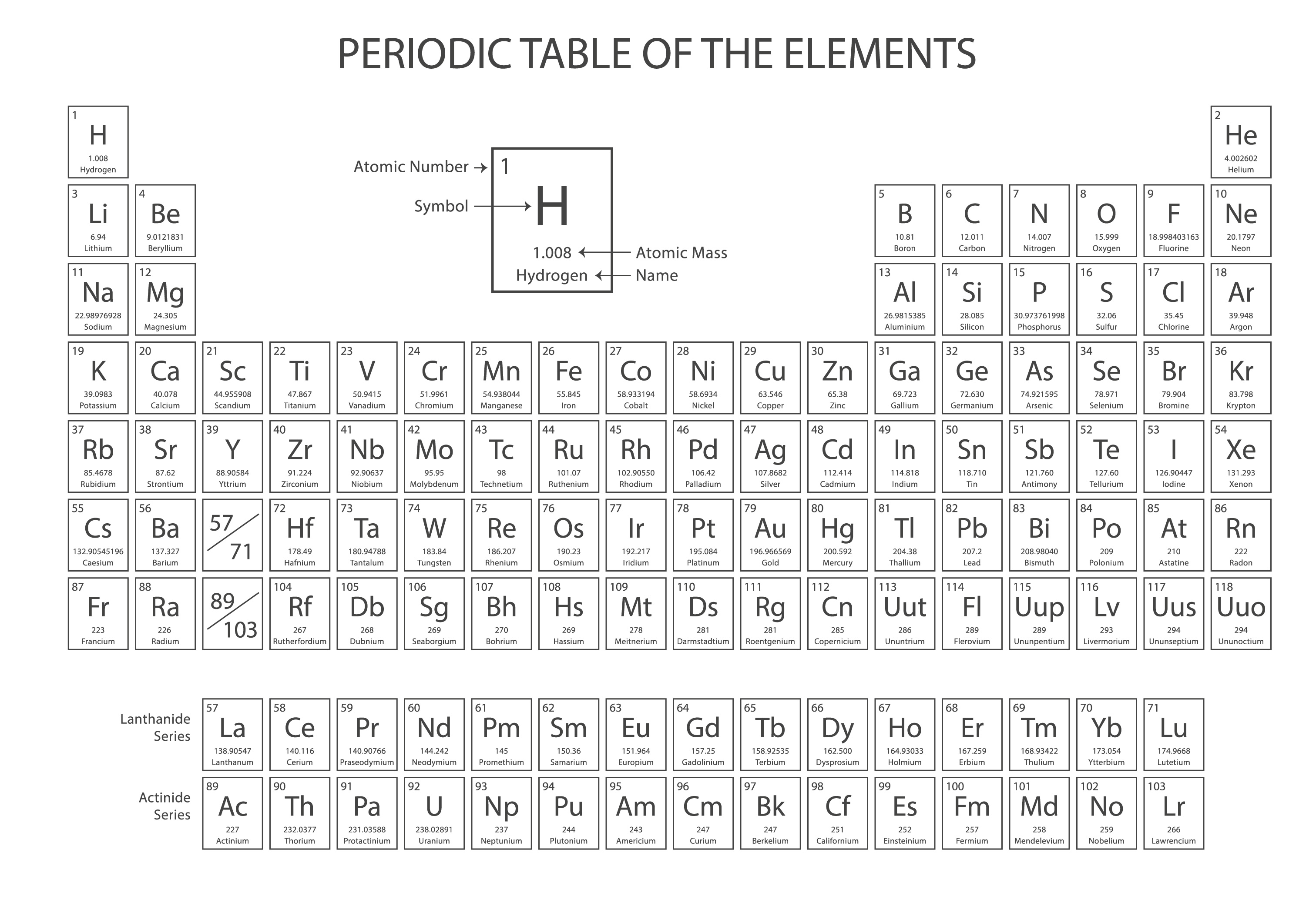 Organization of the Periodic Table

Because electrons have negligible mass relative to protons and neutrons, most of an atom’s mass is in its nucleus. The atomic mass of an atom is expressed as the mass number, the total number of protons and neutrons in the nucleus. Each element in the periodic table has its own square, which includes the element’s name, chemical symbol, atomic number, atomic mass, and natural state. Each square shows the atomic number above the element symbol, and the atomic mass below the symbol.

The atomic radius is essentially the distance from the nucleus to the outermost electrons of an atom. As you move across a period, one electron and one proton are added to each element. The increased attraction between positively charged protons in the nucleus and negatively charged electrons in the energy levels pulls the electrons closer to the nucleus. Electrons exist within levels in the atom. Thus, atomic radius decreases across a period. Moving down a group, new energy levels in the electron clouds of the elements are added to accommodate additional electrons. Atomic radius therefore increases down a group.

Elements are classified into three general categories: metals, nonmetals, and metalloids. On the periodic table, notice the zigzag section toward the right side. This section serves to identify metals, nonmetals, and metalloids. Most elements in the periodic table are metals-malleable, shiny, conductive, ductile elements-and are to the left of the zigzag section.

Metalloids, the elements that form the zigzag section between the metals and nonmetals, have some of the properties of metals. All metalloids are solids at room temperature. They can be shiny or dull, malleable or brittle. Metalloids typically conduct heat and electricity better than nonmetals do, but not as well as metals. Whether a metalloid acts as a conductor depends on conditions such as temperature, light, and exposure to other elements .

All the elements in a group of the periodic table share certain properties because they have the same number of electrons in the outermost energy level. As a result, they are likely to behave in similar ways to obtain a complete set of electrons in the outermost energy level. Groups 1 and 2, along with Groups 13 through 18, are known as the representative elements, or main group elements. The behavior of representative elements is generally predictable. For example, sodium always reacts with chlorine to form sodium chloride.

Group 1 elements are known as the alkali metals. Alkali metals are soft enough to be cut with a knife. They are usually silver in color, shiny, and have low densities. The elements in Group 2 are the alkaline earth metals. These elements are generally hard, gray-white, and good conductors of electricity. The elements in Groups 3 through 12 are known as transition elements, or transition metals. The behavior of transition elements is less predictable. For example, iron might react with oxygen to form FeO or Fe203, depending on the amount of oxygen available.

Directions: Fill in the blank.

Atoms in our bodies, in the environment, and in space are constantly coming together to form new substances. When the atoms of two or more different elements combine chemically, they form a compound. Many elements in nature are combined into compounds. Examples of compounds include carbon dioxide, ammonia, table salt, and rust. A molecule is the smallest part of a compound that can exist by itself.

Just as elements can be represented by chemical symbols, compounds can be represented by chemical formulas. A chemical formula shows the elements in a compound and the ratio of their atoms. The elements in a compound always combine in a specific ratio. For example, water is a compound in which two atoms of hydrogen combine with one atom of oxygen. No matter where on Earth you find the water, or whether the water is ice, water vapor, or liquid water, every water molecule always exists in this ratio of two hydrogen atoms to one oxygen atom.

The chemical formula for the compound known as carbon dioxide is CO2. The formula includes the chemical symbol for carbon, C, and the chemical symbol for oxygen, O - the two elements that make up the compound. The number 2 below the symbol for oxygen is called a subscript. A subscript below an element’s symbol indicates the number of atoms of that element present in each molecule of the compound. The subscript below the symbol for oxygen indicates that there are two atoms of oxygen. If there is no subscript, as in the case of the carbon atom, it is understood that there is one atom of that element. So, the ratio of oxygen to carbon in every molecule of carbon dioxide is 2 to 1.